A New Kind of Democracy

Today is Primary Election Day in Redmond, Washington and there is a new kind of Democracy at work. A Democracy where only the technologically savvy are allowed to vote. And the best part is that we have managed to keep the plebs out surreptitiously rather than using any high profile methods that might attract attention to this new world order that is under construction. Back when I was a kid growing up in suburban San Diego, California, I would often confuse Election Day with Flag day because you would see homes, churches, schools, or libraries absolutely littered with flags and signs that read "Vote Here." It was exciting, and you could hardly miss it. All you had to do was stop by the Polling place nearest your home and vote, or register to do so in the future. Any old 18 year old, no matter how bright, could easily get involved in the democratic process. Here is a picture of my polling place today taken from my cellphone across the street.

No flags, no signs, no nothing! Here is a picture standing right in front of the main entrance. 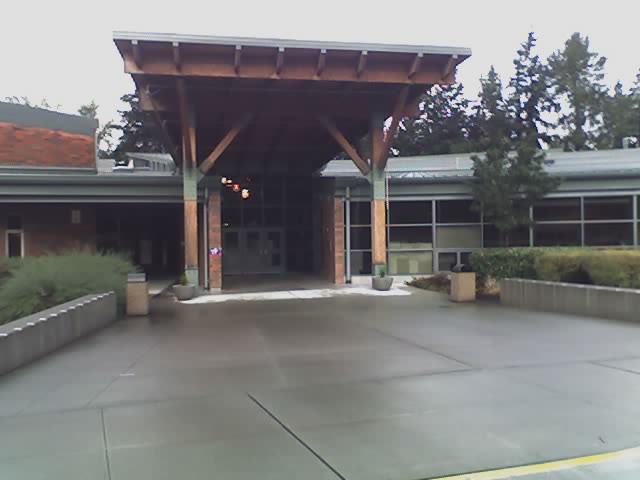 The only hint is a tiny litte sign on the inner left pillar that says Vote and then something asian underneath it. To find this polling place I had to search Google for this website (dead link) and find the link that says "King County polling places" where I could download a PDF that you must be fairly proficient with Adobe Acrobat Reader or Foxit Reader to read since the font is microscopic. The PDF contains the locations in order by district. (a 6 digit number with a hyphen between the second and third digit) You can decode this number from the mailing address label on your voters pamphlet if you were lucky enough to have kept it. Isn't that sneaky? If they had instead asked people to complete a computing and internet competency test before allowing them to vote, there would be a riot. But not this way, no one will ever suspect. I figure this makes my vote count more since untold numbers of potential voters will never know or suspect that this day was any different from any other Tuesday.

I hack all the things